Doctor and the Medics to headline Sunday

The ultimate masters of glam rock, Doctor and the Medics, who shot to fame worldwide in the 80s, are booked to headline BMF Sunday.

The flamboyant rockers are stopping in on their whirlwind schedule to blow the roof off our Big Top in the biggest festival finale we’ve ever had.

Their 1986 hit “Spirit in the Sky” sold more than 24 million copies and was number 1 in 23 countries. And, along with other huge hits that include “Burn,” and “Waterloo”, the band has recorded five albums and developed a unique and sensationally outrageous live show.

In 2015, the band returned to the recording studio and released an acclaimed version of Dead or Alive’s “You Spin Me Round” and dance remixes of “Spirit in the Sky” which reached number one in international dance charts.

But despite their dance chart success, Doctor and the Medics are still a rock act live with a new rock album, more singles on their way and a busy tour booked for 2017. Today’s line-up delivers a fantastic show packed full of 80s hits and Medics originals that the crowds love. 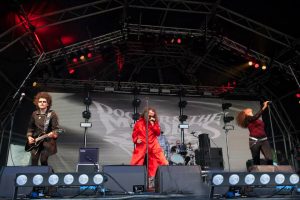 Buying for a family?

If you buy 2 adult tickets you can get 50% off youth and child tickets using the coupon code familyfestivalpass2020 on top of your existing Earlybird savings!